Occupational Toxic Exposures from Burn Pits vs. Illnesses from the Fire Service 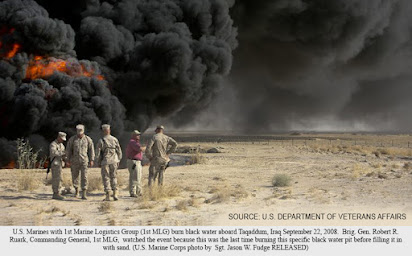 A BURN PIT is a method of garbage disposal in military bases (identified in Iraq and Afghanistan) where all waste is burned in a large pit in open air using combustible agents such as diesel fuel.  All refuse is incinerated here- from medical and human waste to plastics and rubber to environmental hazards like styrofoam, ammunition petroleum products.  The end result of burning these items + the use of incendiary agents like diesel and jet fuel have resulted in airborne concentrations of black smoke within the immediate area that have been recognized to cause respiratory issues to those exposed.

By January 17, 2019, Congresswoman Tulsi Gabbard introduced the Burn Pits Accountability Act (HR 663) to the House or Representatives - Armed Services & Veterans' Affairs Committees. This bill required the Department of Defense (DOD) and the military departments to evaluate whether each member of the Armed Forces has been (1) based or stationed where an open air burn pit was used to dispose of waste, or (2) exposed to toxic airborne chemicals. Members located where an open burn pit was used or exposed to toxic airborne chemicals must be enrolled in the Airborne Hazards and Open Burn Pit Registry, unless the member elects not to enroll. [1]

The effects of Burn Pits are being compared to other known military health cases like the wide exposure to Agent Orange from Viet Nam- as well as the many cancer cases caused by disasters like 9/11.  According to Chisolm Chisolm & Kilpatrick, a prominent law firm representing veterans health issues, "...Unlike exposure to Agent Orange, VA does not consider any disabilities presumptively associated with exposure to burn pit smoke.  Therefore, post-9/11 veterans filing claims for service connection must obtain a medical opinion stating that their condition is at least as likely as not a result of their exposure to burn pit smoke.  VA adjudicates burn pit claims on a case-by-case basis in which the decision is based on the facts unique to each claim.  However, post-9/11 veterans exposed to burn pits do in fact suffer from disabilities entitled to presumptive service connection because they were exposed to an herbicide agent as defined by VA under 38 CFR § 3.307(a)(6).  Here, VA defines herbicide agent specifically as “2,4-D; 2,4,5-T and its contaminant TCDD; cacodylic acid, and picloram”.  TCDD is the unfortunate byproduct in the production of 2,4,5-T, one of the two herbicides in Agent Orange.  Nevertheless, it is also a byproduct of incomplete combustion of certain harmful substances such as those disposed of in the burn pits, as indicated above." [2]

VA has determined that the presumption of service connection based on exposure to an herbicide agent, which includes TCDD, is warranted for any conditions for which VA acknowledges a positive association between the condition and such exposure.  Furthermore, VA has already established this positive association as it relates to many conditions, including but not limited to, diabetes mellitus type 2, ischemic heart disease, and respiratory cancers.  As a result, post-9/11 veterans who were exposed to burn pits should be afforded the same presumptions as Vietnam veterans.

My husband is Leroy Torres, Ret. Captain of the US Army (2nd Battalion, 402nd Army Field) who served 10 years in active service.  His latest tour was 1 year spent in Balad, Iraq (2007) as Deputy Support Operations where he was constantly exposed to the toxic emissions of Burn Pits. I recall him being quarantined for respiratory issues and when he came home, we ended up at the ER due to severe flu-like respiratory episodes.  These issues continue to escalate today, resulting in chronic physical after-effects that recently forced out of his job.

With a simple Google search for "soldiers returning from Iraq and Afghanistan/dying", stories popped up immediately including stories like a wife whose husband had died from a glioblastoma. Reading story after story brought me to Dr. Miller's article about the US Army concealing cases of Constrictive Bronchiolitis- the very lung disease my husband ended up being diagnosed with.  His report also shows an (unnamed) auto-immune disease which prompted me to reach doctors familiar with 9/11- who only had best guesses for us. 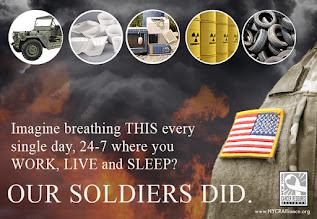 Prior to connecting with John Feal, I remember pulling up the air sampling data from 9/11 online. And then compared the V-A published policy that highlighted the dioxins from a declassified air sampling from Balad (the biggest burn pit) and found that there's around 10 or 12 that are completely the same.  Studying further reports on the mortalities and illnesses again, found identical matches.

DIRECT AND CONSTANT PLUME EXPOSURE:
I've heard soldiers describe it as 10 acres worth of a black plume of smoke that just hovered over the whole base all day & all night - where the burn pits were situated near or next to the housing quarters. There was no area that was untouched by this plume. There was soup on the air conditioners; inside their nose; gray matter and black stuff would come out every time they would shower. This horrible stench was everywhere throughout his entire stay. All the soldiers tolerated this because "we're here to work". Leroy slept with a sheet over his face as a habit to reduce inhaling the "black stuff" while he was sleeping. This went on for an entire year with him, but for other soldiers, exposure must have been more.

I started BurnPits360 with a unique set of initiatives; we use real-time data and our own independent registry (separate from the V-A’s registry) to develop policy and legislation that will help save lives. We have direct access to those people that are sick in every congressional district and we track mortality also. Our goal is to shut down every single one of them, but we also want to help our vets at home with resources and any support that they may need. 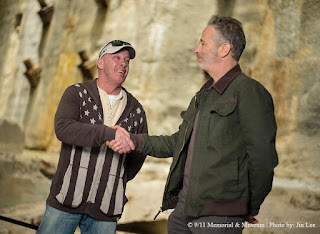 Local Advocacy Calling for Time Sensitive Action + The WarFighters Bill
Prominent names like John Feal (FealGood Foundation) and Jon Stewart (American entertainer & political commentator) have become formidable champions in the legislative arena of 9/11 responders and cancer victims. They have taken on the fight to redefine 'awareness' to call on congressional action to secure healthcare and compensation to those who gave everything in the line of duty during the rescue and clean up efforts at the 2001 disaster.

In the fall of 2019, this dynamic duo has been recruited by Rosie Torres of BurnPits360.org - an advocacy foundation for veterans and families affected by the health effects of Burn Pits exposures. With other powerful supporters like New York Sen. Kirsten Gillibrand and Florida Sen. Marco Rubio, a new bipartisan legislative push is underway to ensure fast-acting health response and compensation to the tens of thousands suffering linked health issues from their military service and sacrifice for this country. 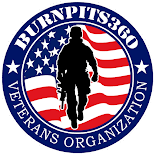 "With many Americans, the usual first reaction when they see a veteran is to say, 'thank you for your service'. As much as I myself don't say that lightly, that phrase is just something we’re all programmed to saying.  We need to modify that to “…thank you for your service and your sacrifice- What can I do to help you? How can I repay you?”  In fact, we can go further by asking “How can I give back to you for what you gave to our country?”  - states John Feal. "I'm confident that we're going to get something done by the end of this year- we're targeting veteran's day! We'd like to see all the legislation passed... it's called the WARFIGHTERS BILL. This is something that a divided country can wrap their arms around where everybody is united together. I still believe our military is one of those sacred things that the American people will get behind."

* Stay tuned for feature article on BurnPits360.org and the congressional healing on March 23, 2021 about a proposal for Burn Pits Legislation. 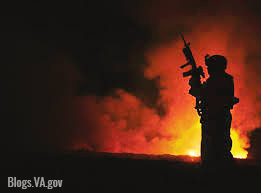 WITNESSING THE HISTORY OF OCCUPATIONAL TOXIC EXPOSURES
By Dr. Robert L. Bard, cancer diagnostic specialist (NYC)
I was an active medical personnel for the US Air Force in the early 70's, where I have witnessed firsthand the many service-related tolls and physiological abuses that our troops have undergone health-wise.  I have scanned countless patients for health conditions linked to incendiary (toxic) exposures.  Many of these same conditions continued to plague them years after their tours of duty. 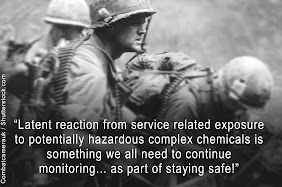 On the domestic front, our medical community found startling parallels between those medical illnesses from toxic exposures to our first responders (firefighters).  This time, exposures from historical disasters like the 1975 NY Tel Fire and 9/11 earmarked a history of health disorders "from the job" linked to exposure to burning complex compounds at high temperatures. A significant number of these individuals who spent enough time in "the danger zone" have contracted varying rates of cancer, calling for immediate diagnostic and treatment- years after the exposure.  This spike in cases can only come from ‘dormant’ cells or recurrence (usually with a vengeance) – such as cases of cancer tumors in the lung, liver, prostate, kidney, brain, skin and even the eye. To troubleshoot each case, it would be advantageous to take a crash course in toxicology and to recognize the chemical compounds that literally BATHED all responders during the event.  Understanding these chemicals can help us pursue their behaviors (on the body) and their long and short term effects.
By mid-2016, a curiously similar stream of disorders appeared in growing numbers, potentially related to toxic exposures from airborne incendiary substances- all from post-military personnel. Cases included neurological issues (nerve damage), cardiovascular disorders, skin lesions and liver & kidney problems - to name a few. News reports appeared to link these cases with military burn pits (and other fire related exposures) where prolonged exposure to burning plastics, lubricants, petroleum-based products and other refuse material were the likely culprit.

Disclaimer & Copyright Notice: Copyright (c) 2021, IntermediaWorx inc. All Rights Reserved.  Additional copyrights shared by: The AngioFoundation (501c3) and the publishers of Prevention101.org  & The NY Cancer Resource Alliance [NYCRAlliance.org].  Contents in this article are provided publicly for informational purposes within non-commercial use and not for purposes of resale, distribution, commercial display or performance. Unless otherwise indicated on this web based page, no reproduction of any or all materials of this page is allowed without express/written permission from the publishers.  Additional permission may be required from third-parties who have provided limited permission for our publishers to use their content, whereas licenses for some of this Content may contain additional terms. When such Content licenses contain additional terms, we will make these terms available to you on those pages (which his incorporated herein by reference).The publishers/producers of this site and its contents such as videos, graphics, text, and other materials published are not intended to be a substitute for professional medical advice, diagnosis, or treatment. For any questions you may have regarding a medical condition, please always seek the advice of your physician or a qualified health provider. Do not postpone or disregard any professional medical advice over something you may have seen or read on this website. If you think you may have a medical emergency, call your doctor or 9-1-1 immediately.  This website does not support, endorse or recommend any specific products, tests, physicians, procedures, treatment opinions or other information that may be mentioned on this site. Referencing any content or information seen or published in this website or shared by other visitors of this website is solely at your own risk. The publishers/producers of this Internet web site reserves the right, at its sole discretion, to modify, disable access to, or discontinue, temporarily or permanently, all or any part of this Internet web site or any information contained thereon without liability or notice to you.