9/11 COMMUNITY- UNITY & RECOGNITION IS STRONGER THAN EVER 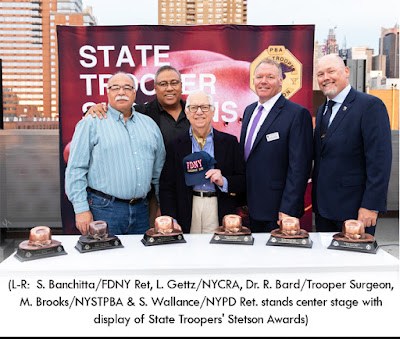 Sept 5, 2019, an unexpected invite from Dr. Robert Bard (NY Cancer Resource Alliance) and Michael Brooks (State Trooper Surgeons) brought me to the most stunning NYC midtown rooftop of Manhattan Motorcars, the State Trooper Surgeons Awards Mixer, hosted by the NYS Troopers PBA. Mingling with hundreds of sharp-dressed medical professionals, top career members of the State Police and an assembly of FD and PD retirees was a heartwarming event of appreciation for their Surgeons but also for the many 9/11 responders.

I’m told that I was called to attend because Mr. Brooks got wind of my cancer awareness program for Firefighters and my 9/11 First Responders Health Scan outreach mission.  But what sealed the invite for me was hearing about the familiar names and faces like Matthew McCauley (my own former 9/11 counsel), Dr. Marc Wilkenfeld of NYU Winthrop, Dr. Frank Maurio, neuropsychologist and other connections from Mt. Sinai/WTC Health Program.  Meanwhile, as I made my way into the clearing of the rooftop crowd, THE most recognized face for any retired 9/11 firefighter confidently stood with his crew- representing the society that I am only too familiar with.

“FEALING” THE APPRECIATION FOR FIRST RESPONDERS
Wherever John Feal was, you know it was going to be related to 9/11 in some major way.  The program announced that he was going to receive one of their top awards, The Stetson Award, for his selfless support of the NYS Troopers.  They also wanted to honor every first responder who attended.  John represented us throughout the 18 years of political upheavals and getting everyone certified (with the WTC program).  Meeting him personally, you could sense the presence of every one of the thousands of first responders that he brought personal care to. Where a part of me tries to put 9/11 in some safe and distant perspective to survive the madness of it all, John continues to stay front-and-center to his unfathomable commitment to ‘never forget’ 9/11 for everyone else’s sake.

UNITING FROM A PLACE OF COMMON GROUND

Surrounded by the golden NY skyline shimmering from the early evening light, each firm handshake came from a job description more involved than the next. From the start, this evening with State Troopers was clearly a very different (and most impressive) type of mixer than what I’m accustomed to.  More than the glamour of a fancy rooftop venue surrounded by expensive sports cars - and even more than the style of a well-catered spread and the large collection of A-listers, the PBA committee definitely worked hard to make sure this was an unforgettable night by covering every finest detail.

“Tonight’s event is about gratitude”, said Mr. Brooks as he began his presentation.  “This is an opportunity to say thank you to those who were there at the moment and during the aftermath of 9/11, as well as to the medical professionals who have cared for those individuals every step of the way”.  “Each year we also have a number of physicians who’ve saved the lives or careers of members of the NYS Troopers PBA”, said Brooks.  “This event is about all of you”.

I didn’t know much about Mr. Brooks other than that he is the current Director of Medical Operations of the State Trooper Surgeons program and his current exploratory meetings with Dr. Bard’s digital cancer screening and PTSD imaging programs.  He helped to enlighten me about what the surgeon’s program is and what his faction of the law enforcement community was all about. Where I (and many other firefighters) once looked at all city and state service agencies as that exclusive “us vs. them”, Mr. Brooks and his PBA members opened to us all the mantle of honor and commitment about ‘the job’ in such a way that reflected the same familial bond and organic leadership that I grew into with the FD.

I found new and enjoyable ties of appreciation for the NYSTPBA.  By the end of the lengthy presentation of awards, Thomas Mungeer (president) wrapped up the night on the mic and humorously asked the crowd “…so did anyone here NOT get an award?”  He was met with laughs and a roaring applause of appreciation because, at least from where I stood, being there welcomed by this community of allies was truly an award worth taking home with me.

- A New Breath of Care for our Retired Heroes: Cancer Resource Alliance Supports the RMA

The New York State Troopers PBA, through its State Trooper Surgeons Program, honored several key medical professionals who have been instrumental in saving or improving the lives of NYS Troopers or their family members.  NYSTPBA President Thomas Mungeer hosted the 2019 State Trooper Surgeon Awards Mixer, a special cocktail reception and awards ceremony honoring physicians from all over the New York State, including Long Island, Saratoga Springs & Buffalo- bringing a large number of Troopers and Doctors together, helping everyone in attendance understand the true value of the State Trooper Surgeon program.  It's a great opportunity to recognize truly heroic acts of our physicians, and it's a fun way to build long lasting relationships. SALVATORE "SAL" BANCHITTA is a retired firefighter from Engine 316 of the 49 Battalion.  He was one of many first responders in 9/11. His professional commitment to the FDNY and to the City of New York placed his life and well-being at extremely elevated risks in many rescue calls and even more so each day that he spent directly exposed to the deadly dust of Ground Zero. His experiences as a 9/11 rescue member help us identify the magnitude of issues that all workers underwent inside the highly toxic disaster zone, illustrating how so many have contracted the most traumatic illnesses and cancers.

DISCLAIMER
THE FIRST RESPONDERS CANCER RESOURCE, its content, its interviews, images or content from this article/website is not endorsed, sponsored or associated in any way by the FDNY or any fire departments, rescue units or any emergency responders (of any city or county) or subsidiary organizations or institutions thereof. Any reference of any city, state or federal entities are strictly for information.  THE FIRST RESPONDERS CANCER RESOURCE is an independent website supported and partially sponsored by The Biofoundation for Angiogenesis Research and Development (www.AngioFoundation.org) a 501c3, the executive board of Awareness for a Cure, the NY Cancer Resource Alliance (Linkedin group), The Male Breast Cancer Coalition (501c3) and its respective donors and is produced by donation by IntermediaWorx Educational Publishing (imworx.com). This website/blog/web publication is intended to provide users with free online access about the contents included in this site. The website represents the informational works of an alliance of volunteer awareness speakers, writers, educators, cancer survivors, retired rescue professionals and clinical professionals whose contribution to this website and its public advocacy programs are to provide available public information and resources about CANCERS in our community of first responders, civil service workers, rescue workers or any person(s) exposed to toxins during their work.  All person(s), participants, writers, speakers, video presentors and all those who are mentioned in this website offer their insights, research reports, editorial content, technical material and/or personal ideas have done so freely and independently of each other are are published under COLLECTIVE COMMONS as informational and free public awareness.The information contained in this website should not be construed as medical advice on any subject matter.